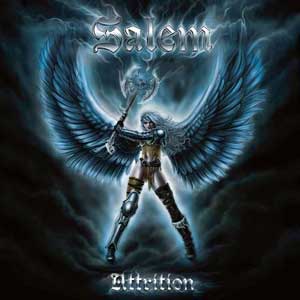 Salem is another NWOBHM band from Hull, England that was re-energized from 2009 onwards and released their new album “Attrition”. This is their third album in the current decade, and they actually do what they did not in the 1980s when they only recorded some demos. “Attrition” is not a bad album at all. I would say the opposite. The riffs are very nice and totally representative of the idiom. They put down some very good melodies and solos and their ideas are good in general and sometimes original. What I found a little odd from the beginning was Damian Balthazar’s vocals. Whether you like them, or not. His voice didn’t seem like a perfect match with their music in my opinion and I thought that it spoils the quality of the compositions. It’s neither bad nor out of tune. It just did not stick to my personal taste.

Songs I liked from the first spin are “Black And White”, “I Am The One” and “We R Godz”. The overall impression I got about the album “Attrition” is that it is a fairly good effort, but it stays in the context of the most amateur and underground approach and I am not convinced that they can climb to the top, or on a higher level of our beloved music.