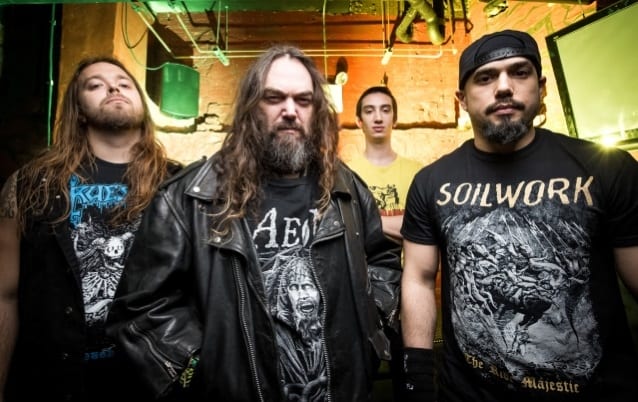 In a brand new interview with Backstage Axxess, Max Cavalera spoke about his plans for SOULFLY’s follow-up to 2015’s “Archangel” album, tentatively due next summer via Nuclear Blast. He said: “I’m actually writing right now. I’m collecting the riffs right now and getting the ideas. We are already kind of booked for January with Josh Wilbur, the producer of LAMB OF GOD and GOJIRA and KILLER BE KILLED. I think he’ll be great for the SOULFLY record; he’s a great producer. I’m excited, because I think the album will have a little bit of a return to some tribal sounds that I haven’t done since [2004’s] ‘Prophecy’. So that’ll be cool, to return to some of that. And then the rest of the album will be a continuation of ‘Archangel’; a lot of people like ‘Archangel’. And, of course, I think that it will be also somehow influenced by [CAVALERA CONSPIRACY’s new album] ‘Psychosis’, ’cause ‘Psychosis’ was such a cool record that I’m sure that somewhere in the SOULFLY record we’ll have the influence of that on top of it too. So it’ll be a really cool record to work on.”