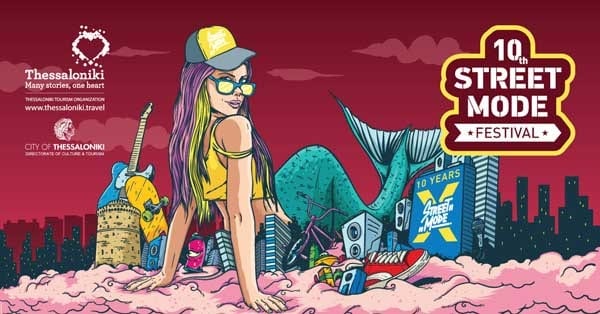 The biggest festival in Greece returns for a 10th anniversary year, in its most integrated form, with more than 100 concerts and all actions of street culture, setting up the ultimate festival  experience of the year!

Street Mode is an annual festival of Music, Art and Sports, taking place in Thessaloniki since 2009. In 2017 (during its 9th edition) it brought together 40.000 guests who attended a multi-day program including concerts on 5 stages simultaneously, musical contests and street actions. This year it is coming back, more vigorous than ever, and –for the first time ever- it is going to last for 4 days (Thursday, August 30th – Sunday, September 2nd) featuring one more live stage (6 in total!).

The only Pan-Hellenic Parkour Contest is coming back for the 3rd successive year! Renewed, a 4-day event with 4 contests and many awards and bonuses for the winners:  Speed Contest and Freestyle Contest in two categories –one for over 18yrs old and one for under 18yrs old.

*** An action by Natural Movement Parkour & Climbing Academy presented and coordinated by Parkour Coach Dimitris Kaimakakis. Registration forms and participation instructions for interested athletes are available in www.streetmode.gr. For underage participants an affirmation by their parents will be necessary.

The first dance contest for women (Female Battle) is coming back to Street Mode Festival.  The best 16 dancers of each genre (all style) will battle for the title of the top dancer of the year!

*** An action by Hip Hop International Greece, presented by Georgia Jo and Bboy SaSpens. The best 16 girls, who will compete, will be announced soon.

Just like every single year since 2010, the best 16 breaking dancers of Greece (B-boys) will battle for the title of the top dancer of the year! The longest competing B-Boy Battle of Greece could not be absent in the program of Street Mode Festival.

*** An action by Battle of the Year Balkans, presented by: Apostolos Aristidou and Bboy SaSpens.

Do not miss out on the best special shows from the 10 best dance groups in Greece.
Red Βull Stage & Puma Stage

Trus: Member of the legendary BAD Crew from Berlin, well-known for his lettering style and his graffiti pieces on trains in Germany, as well as the rest of Europe.

Sany: Well known for her documentary about women’s graffiti “Girl Power”, which is scheduled to be screened on Sunday September 2nd at Street Mode Festival. Originating from Czech Republic, Sany is already famous worldwide, mostly known as the public figure representing a major sportswear company. Before the screening of “Girl Power”, Sany will give a speech about women in the scene of graffiti and street art and will do a Q&A about her actions and involvement in the whole movement.

Marcos Cabrera: The famous Spanish illustrator, has his roots in graffiti and street art. He is well known for his T-shirt, skateboard and snowboard designs as well as for his collaboration with music festivals like Ressurection festival (Spain) and Street Mode Festival (Greece).

► Erasmus+? What is it?
Learn everything about the opportunities at the Erasmus+ Info Point

Skate Mode = Contests, trophies, giveaways and adrenaline to the maximum!
Suitable for any individual that wants to participate to the contest or just “roll” at the festival skate area!

#NBT (Next Big Thing) Music Contest addresses to bands but also solo artists of all genres, aiming at their highlighting and promotion to the public. Winners gain a class on the  line-up of Street Mode Festival 2019, as well as promotion and advertisement packages from Access in Music, Τ-shirts with their logo from One Two Six Merchandise and also interviews and airplay at 1055Rock!

#NBT Music Contest will come out live on Friday August 31st, 2018, at one of the indoor stages of Street Mode Festival. Follow the link to the poll and vote for your favorite bands to participate in the finals: https://poll.app.do/nbt2018.

THHF is in Street Mode, the battle begins and the temperature gets higher than ever! The legenday THHF returs on Sunday, September 2nd from 16:00 to 20:00, to present a program dedicated to the Hip Hop culture, in collaboration with Street Mode Festival. This will include the hottest battles as well as the screening of “Girl Power”, the first documentary about women’s graffiti & street art!

Are you a rapper or a beatmaker? Participate in the MC Battle & Beat Making Battle, by sending your artist name, your age and your phone number at thhf@streetmode.gr. Also include:

For the MC Battle: A rap video (via Sendspace, Wetransfer or a Youtube link), freestyle or verse, without a beat (acapella) in 16 bars / For the Beat Making Battle: Two of your beats in MP3 format.

Before the screening of “Girl Power”, Sany will give a speech about women in the scene of graffiti and street art and will do a Q&A about her actions and involvement in the whole movement.

Street Mode in collaboration with Gimme Shelter Film Festival and THHF presents, for the very first time in its 10 years, film screenings at the festival indoor stages (Red Bull Stage & Principal Stage). Films related with the street culture and the festival’s musical identity, with the participation of their creators as well as the promoters from GSFF (speeches, Q&A’s etc) will make their first time appearance at Street Mode Festival, setting the ground for a whole new section of activities to follow in the next years.

With its roots in the street, Street Mode set off initially as a series of events in open, public spaces, such as Thermi Square (2009-2013) and the Port of Thessaloniki (2014-2016) in order to present all the aspects of street culture in a common effort.

As street culture, we define a sub-culture developing mainly in urban areas. It is expressed freely through arts, such as graffiti and breakdance, but also through sports, such as skateboarding and parkour, and is represented by the sounds of hip-hop, punk rock, heavy rock και ska / reggae / dub music. 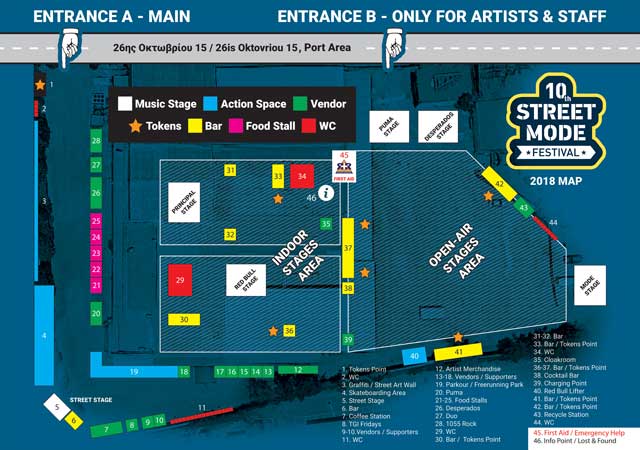