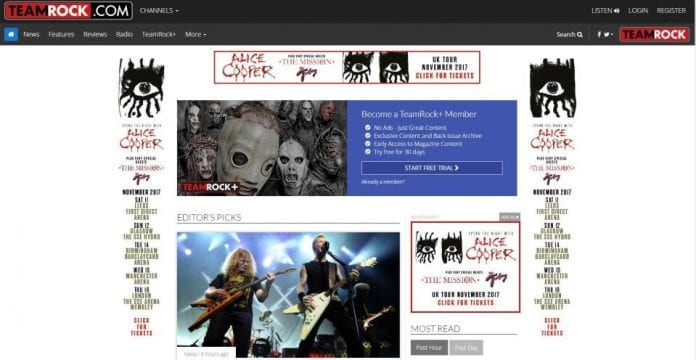 According to the Daily Record, UK Publisher Team Rock Ltd has gone into administration (UK’s equivalent of bankruptcy/liquidation) with the loss of 73 jobs.
The Hamilton-based business, founded in 2012, published a stable of rock music magazines including Classic Rock, Prog and Metal Hammer magazines, as well as the rock music website www.teamrock.com and TeamRock internet radio.
Appointed administrators from FRP Advisory said the business had traded at a loss “for a significant period of time, with consequent constraints on the cash position”.
The administrators added: “Cost-cutting measures were implemented and despite the best efforts of the directors to seek additional investment or a purchaser for the business, no deal could be completed, leaving the company with no viable option other than to enter administration and to immediately cease trading.
“A handful of staff have been retained to assist the administrators, with all other employees made redundant.”
Most recent accounts filed by Team Rock Ltd covering the 2015 year to March 31 show the business booked a pre-tax loss of £8.8 million, having booked a pre-tax loss of £4.3 million the prior year.