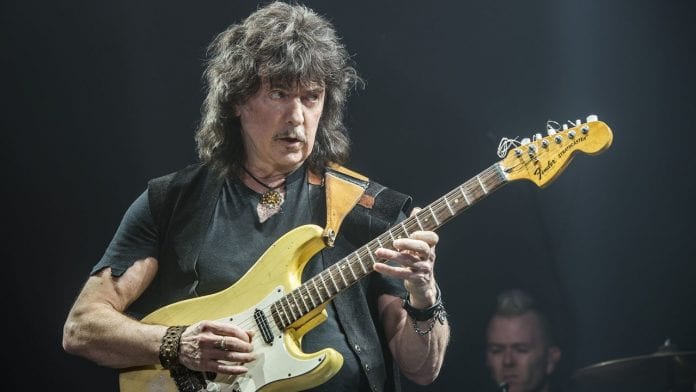 Ritchie Blackmore has once again said that he would be willing to play a “one-off” concert with DEEP PURPLE before the iconic hard rock band calls it quits.
“I would like to do one, maybe one show with the rest of PURPLE just to prove that we’re not all hating each other,” Ritchie said. “And just do that and go, ‘Hey, everybody. It’s just one show for all the DEEP PURPLE fans that liked the Mark II lineup.’ That was my idea in the beginning. But when you’re talking to managements of PURPLE, it gets complicated. They want their money for this and that. So it’s not like you call up your old friends and just say, ‘Hey, let’s just have a good time and play. There’s lots of fans that want to hear it.’ Once you have managements and agents and promoters getting involved, it gets so complicated that everybody just calls back and says, ‘It’s too complicated.’ So, I wouldn’t mind doing one show with all the old guys, and that’s it — call it a day. Just for the fans. It’s not something I need to do. But I don’t mind playing just to show the people that we’re still friends. We’re older, and with the passing of Jon [Lord, DEEP PURPLE keyboardist], you never know who’s gonna pass next. And it would just be a friendly get-together. But as you might know, in this business, nothing works around friendship — it’s all about money and business. And unfortunately, we’d have to deal with people that were going to make money out of the deal. That’s always a problem.”
Pressed about his often-volatile relationship with PURPLE singer Ian Gillan, Blackmore said: “I liked it on a physical level — I liked fighting him, and he liked fighting me. I’d throw spaghetti in his face and he’d punch me. That’s all good stuff. I think we should go do one more show and get lots of spaghetti and throw it all over each other.”
He continued more seriously: “I think it would be good from a nostalgic point of view of just showing that we can do it again as the old band. Obviously, Steve Morse is their guitar player — a fantastic guitar player — and it’s good that he’s in the band. This would just be a one-off. Obviously, I wouldn’t join the band again, and they wouldn’t have me. That’s out of the picture. It would be one show. And hopefully it would be fun. But there again, knowing Ian and I, we’d probably start fighting.”