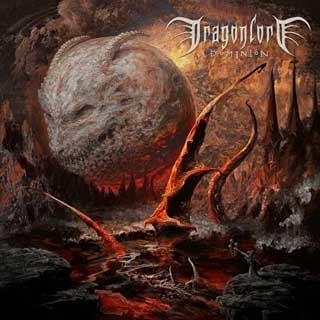 PRESS RELEASE: Renowned Testament guitarist Eric Peterson recently announced the release of his highly-anticipated new DRAGONLORD album, entitled Dominion, out September 21, 2018 via Spinefarm Records. The symphonic black/death metal album serves as the long-awaited follow-up to 2005’s Black Wings of Destiny, but takes the fantasy and storytelling to a whole new level. Dominion explores themes of darkness owning and influencing these times we now live in, and things that have come to pass. It also delves into other eras, real and otherworldly.

Get your first taste of Dominion now by streaming the album’s title track via lyric video here:

Today, DRAGONLORD mastermind/vocalist/guitarist/bassist Eric Peterson is pleased to reveal the very first episode in a series of three “The Making of Dominion” videos. Part one details the growth of DRAGONLORD since the release of their last album and the initial writing process on Dominion, also highlighting the individual musicians on the album – including Lyle Livingston (Psypheria) on orchestrated keys and pianos, Alex Bent (Trivium) on drums, and notable fantasy metal singer Leah on female vocals and choirs (who has performed/recorded with members of Blind Guardian, Nightwish, Delain and others). Unreleased audio clips of the album are also mixed in amid the video content.

In part one, Eric Peterson says, “Right around 2010, Lyle and I were talking about maybe doing another DRAGONLORD record… I contacted [our producer] Juan… he’s like dude I have the perfect drummer for you too… his name is Alex Bent. He ended up coming over, we jammed on some older DRAGONLORD songs… he had this really cool groove and right there and then I knew. This is probably the best sounding drum record that we’ve put out.”

“Leah and I go way back,” adds Peterson. “She had invited me to do some vocals on one of her records and we talked about maybe doing more stuff together. We ended up doing a Christmas song together called “Winter Sun”. We got a lot of responses from it and people wanted us to do a whole record that sounded like that. So, after hearing the [DRAGONLORD] record… we thought it would be really awesome to have a real voice interpret what Lyle had done on the choirs. Right then I was like, Leah’s got to come here and do that. She really nailed it. I’m super happy with the way it came out.”

As aural the gates to Dominion creak open on the first track, “Entrance,” you descend into the dark world of DRAGONLORD and there’s no turning back. The pummeling begins with the title track, “Dominion”, welcoming all who dare enter into an eternity of misfortune. Then it’s into “Ominous Premonition”, which Peterson likens to “the soundtrack to the gates of hell”. The track “The Northlanders” is about brutal 11th century Northmen, while “The Discord of Melkor” will thrill Lord of the Rings fans with an untold tale– “my take on Tolkien’s “Silmarillion,” the first age of the Lord of the Rings saga genesis,” says Peterson. Then there’s the surprise of the slower, Black Sabbath-influenced duet with “my amazing Celtic vocalist friend and collaborator Leah,” Peterson explains about “Love of the Damned,” an abstract piece that still explores a love story – with the devil, of course. “Almost like a switch-up story of if Beatrice from “Dante’s Inferno” did fall for the Prince of Darkness!” Dominion’s eight songs create a deep and heady musical journey rife with meaning and menace, from the blackest and loudest recesses of Eric Peterson’s mind.

5) Love of the Damned

7) The Discord of Melkor

Peterson formed DRAGONLORD in 2000 as its singer and guitarist (with keyboardist Lyle Livingston and now-ex-members Steve Di Giorgio of Testament and Jon Allen of Sadus), and notes that the growth from DRAGONLORD’s first two records to the cinematic triumph and brutal blast-beats of Dominion has been immense. Dominion’s stellar, complex, brutally symphonic metal is triumphant in its execution, bringing together layers of meaning and musicality into an unholy whole.

Stay tuned for information on the official DRAGONLORD comic, “THE BURNER”, which is scheduled to be released during this year’s San Diego Comic Con!