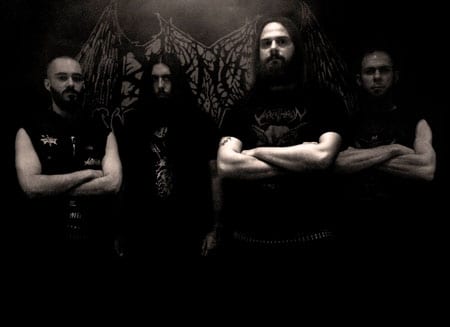 Comments Ravencult: ” Ravencult is proud to join forces with legendary Metal Blade Records for a worldwide deal. We are honored that our upcoming third full length album in 2016 will be added to a glorious back catalogue that includes masters like Slayer, King Diamond, Mercyful Fate, Cirith Ungol, Immolation, Bolt Thrower amongst others.

“Those who are familiar with us know our driving force has always been a deep devotion to real, straightforward riff-based metal, defending the sound of Old and the mentality that follows. Not only this remains the case, but shall be also enforced as we consider this a new channel for us to spread our aural primitivism.”

Spawned in existence during 2001 to revive the relentless side of Black Metal, Ravencult brings forth an unpolished, organic sound to manifest their morbid darkness. Originating from Athens, Greece, they have evolved through the years from a late 80s/early 90s Black Metal approach of their debut album “Temples Of Torment”, to a macabre union of pounding Black/Thrash Metal in their sophomore “Morbid Blood” full-length. Making their live appearances a feast of tension and sonic violence, they have performed in over 20 countries sharing the stages with some of the most infamous acts of the genre. Conjuring forth the forces of black thrashing command with fanatic devotion, Ravencult is Greece’s guard of sinister metal.