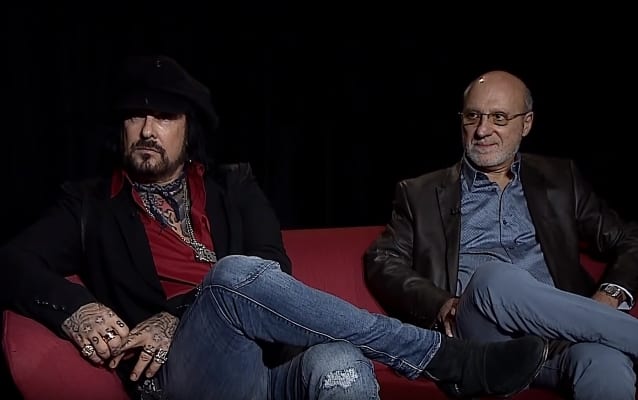 Pete Mitchell of U.K.’s Virgin Radio recently conducted an interview with MÖTLEY CRÜE bassist Nikki Sixx and manager Allen Kovac about the band’s new biopic, “The Dirt”, which is based on CRÜE’s 2001 New York Times bestselling autobiography.
Allen Kovac: “I don’t think you’re on the same path. THE BEATLES glamorized acid. You had Keith Richards [THE ROLLING STONES] glamorizing heroin. These were kids. And the success happens, but you’re also in the era of excess. People are doing blow while they’re doing disco. Everybody is excessive, and all of a sudden, these guys, who always wanted to differentiate themselves, decide, ‘We’re gonna be crazier than everyone else.’ The movie deglamorizes it. And I think it’s the first movie where rock stars are talking about the downside, the very dark downside. I think that’s one of the takeouts of this movie — that artists today have a responsibility to know the damage that they can do to themselves but also to their audience, whether it’s hip-hop or it’s Demi Lovato OD’ing recently. I think that’s where this film is really important for music and pop culture.”