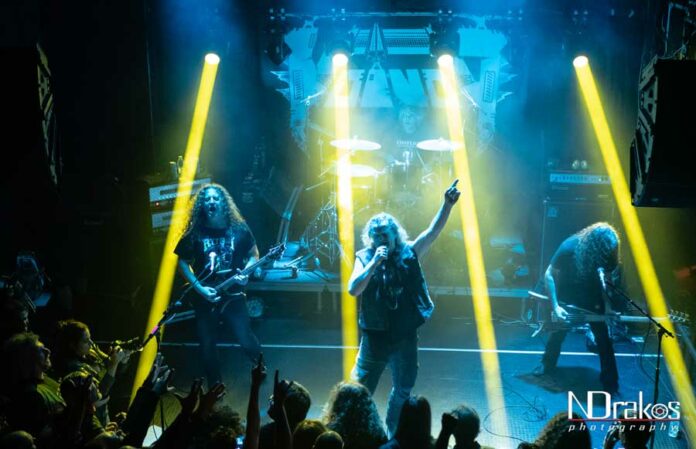 Concert on a Monday night is not a usual thing here in Greece. But the metal fans made a festive Saturday night out of it and packed the venue right from the very start, just on time for Exarsis.

4 and a half years away from the Athenian audience, as frontman Nick Tragakis stated, are far too many. Same goes though for the line-up changes that the band has undergone and in my opinion have held the guys a bit back. So with new members on board and the eagerness to please, Exarsis owned the stage presenting an evermoving speed/thrash orgy. The sound wasn’t an ally but the energy generated was more than enough in order to scorch the audience on the first freezing day of the year. This gig certified that Exarsis, alongside a few other colleagues, are the tip of the spear when it comes to domestic thrash metal.

Voivod shares a special bond with the Greek audience and I don’t think that the enthusiasm they encounter every time they visit our country can be found elsewhere. A truly unique case of a band that shatters any attempts of categorization and with each and every album seems to expand the pallet of soundscapes it represents and influences it holds. No surprise though since they are born out of this special Canadian cauldron that has produced a fair number of greats.

With extended setlist since this was a headline show (the first one since the tour with Opeth started), Voivod honoured 8 out of 15 albums and the brand new Synchro Anarchy was represented through 3 songs. Chewy and Rocky are fully integrated in the Voivod machine and give the impression that they have been there from the start, complementing Snake and Away in the best way possible. Difficult and introvert as far as it concerns their music but at the same time approachable and enthusiastic on stage. Dystopia and Utopia are just a heartbeat away it seems.